I am a painter and digital artist. 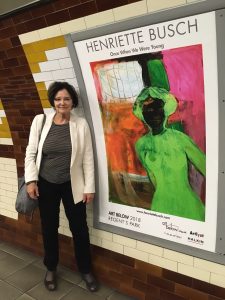 I was born in Berlin, Germany and when I was twelve, moved with my parents to Liberia, West Africa. After that I lived in Suriname, (South America), North America, Liberia again and finally England, over 25 years ago.
Many things inspire me –memories of houses and countries I’ve lived in, old photographs, nostalgic childhood pictures, the beauty I see around me, loss and sadness – in short, life.
My paintings and digital images also reflect my interest in colour, layers, texture and mark making. Colour is very important to me because it can so well describe a particular emotion.
My artwork is quite varied and often jumps between the abstract and the figurative - I like working in this way as I find it very liberating. In my digital art I fuse parts of my paintings and photographs and through juxtaposition create new and different meanings.
This process often has unexpected results and produces images which are new and exciting. For me, this process of exploring, experimenting and improvising is as satisfying as the end result.

Highlights 2019
In March - pre-selected at the RBA (Royal Society of British Artists)
In June - my painting “Gertie on the low wall” was chosen as the “Painting of the Day” by British Contemporary Art.